Showing posts from July, 2009
Show All

- July 30, 2009
During our recent holiday trip to Cornwall we managed to visit Goonhilly and The Marconi Centre where I got to play some portable/mobile ham radio from the historic site. The video shows the Marconi Centre's antenna array and its beautiful location, as well as the massive Goonhilly Dish Arrays in and amongst some very nice QSOs on 20M, 40M and 2M. Hope you enjoy the video, More info to follow.
2 comments
Read more

- July 23, 2009
I was fortunate to be in the shack earlier this evening in order to catch the ARISS school contact where I got the chance to try out the latest IOIo Home brew antenna that I made earlier in the week. The antenna received the ISS very well as you can see in the video that I made during the pass. The Video shows the ISS side of the ARISS school contact with Frank De Winne -OR4ISS coming through loud and clear in Yorkshire England. I received a 5/9+60dB signal from OR4ISS on board the International Space Station during the pass over Europe at around 19.35 utc. Equipment used: RX/TX - Yaesu FT-847 Earth Station. Antenna - IOIo 145/435-437 MHz Home made Satellite beam (Fixed at 30 deg Elevation), Yaesu - G-250 Rotator.
Post a Comment
Read more 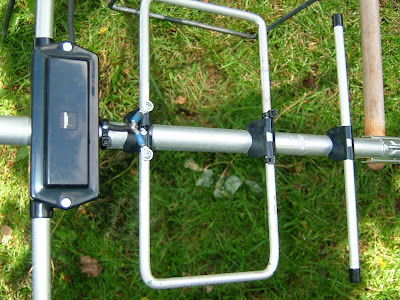 It's been just over a week since I installed the 10-element yagi in the place of the 435 MHz IO loop and as you can imagine, I have been testing it out at every opportunity. Unfortunately like the previous experiments once again I was disappointed with this time 10-elements against the single IO-Loop's performance. The new yagi appeared to be poor in comparison. So, now that I have finished for the summer holidays I decided today would be the day that I got to grips once again and sort out my home brew dual band satellite yagi/beam antenna. I had been toying with scrapping the driven element and replacing it with another IO- type loop. I dropped the antenna and set about fitting the 435 MHz loop, I used the original element/boom plastic clamps and with a bit of measuring and a few adjustments I grafted in the new loop as the now replaced driven element (DE). I then used the original (now spare) driven element as a reflector and re-positioned it behind the loop at the required
4 comments
Read more 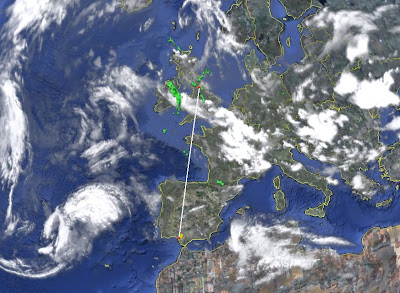 Since last week I have been busy playing radio making some great contacts on many different bands. The week started off on 40m where I was in company with local Hams Adam - 2E0LXA and Phil - M1PAC. We were working as a group on the now QRM free part of 40m and managed contacts from G - land to Stateside. We had lots of QSOs with many stations calling in. I don’t think I’ve had quite so much fun on 40 in a long time. We will be active throughout the week once again as a group, if you do hear us please call in it will be a pleasure to get you in the log. We’re usually found around 7.130 +/- QRM from around 20.00 UTC. Other news was when I worked Steve DL1YAL “The Yorkshireman in Germany” via VO-52 for the first time. Steve has recently acquired a trusty old Yaesu FT790r and was coming through great during the pass. We have yet to work on FO-29, AO-27 and SO-50 as well as the ISS repeater. I have also had a lot of fun contacting a lot of my Ham friends and arranging skeds via Twitter, i
7 comments
Read more

- July 04, 2009
After a few nudges and hints to put a video together containing my Humble hombrew and commercial efforts that I call my Antenna set up, here it is! My Antennas By 2E0HTS.
3 comments
Read more
More posts