After 10 years of careful use my G-5500 eventually developed a couple of faults on the elevation rotator side. 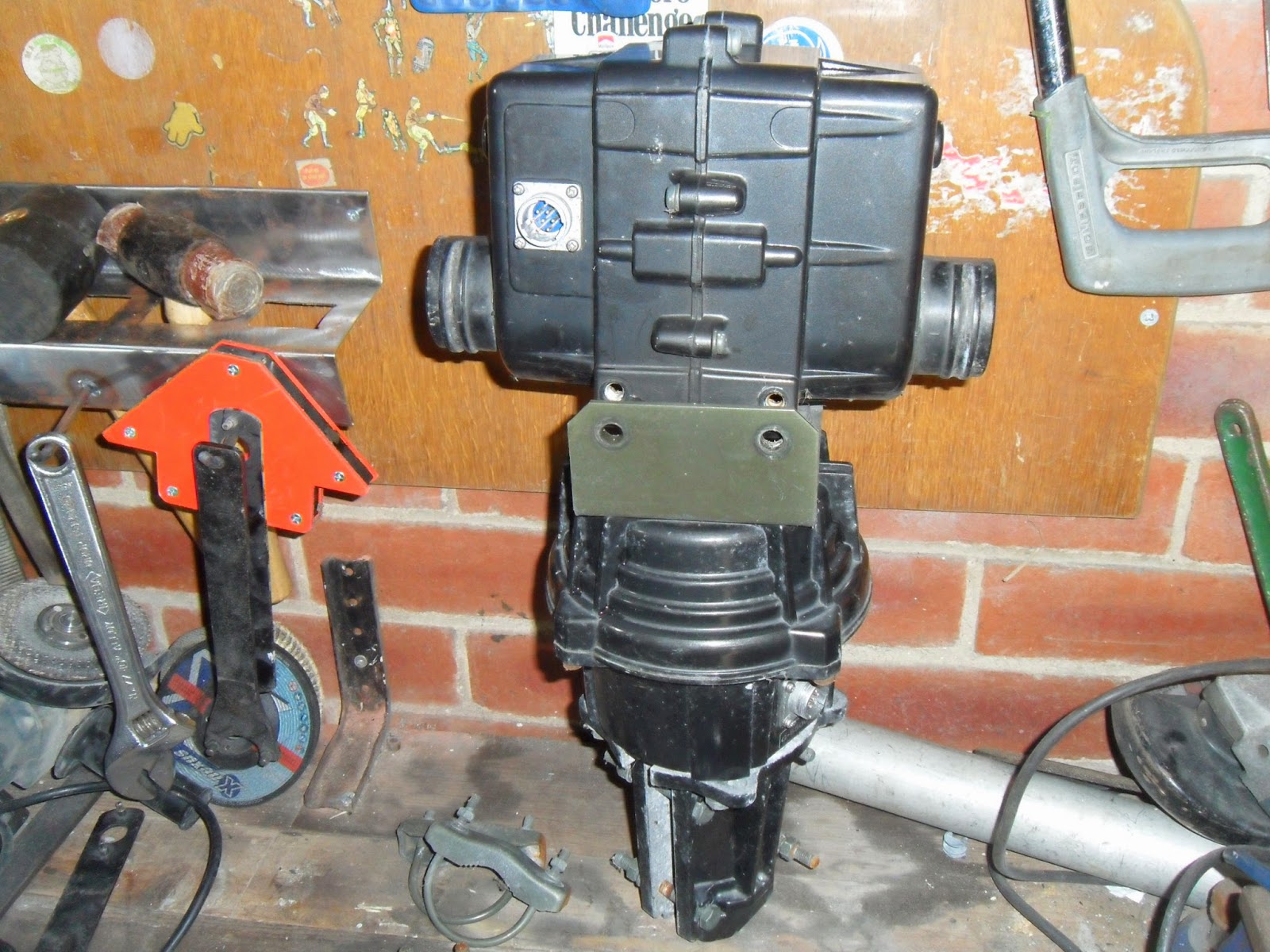 Fault 1. For the past year I have had to guess the elevation as the readout was no longer working on the controller unit. I suspected the position switch which was located inside the rotator up above the house roof which was a pain in the butt to say the least.
Fault 2. Over the winter the gearbox on the elevation rotor seized up solid.

I plucked up some courage and erected my ladder and which with the aid of a rope to lower the mast it all worked out quite straight forward. Once down out with the impact driver and away I went. 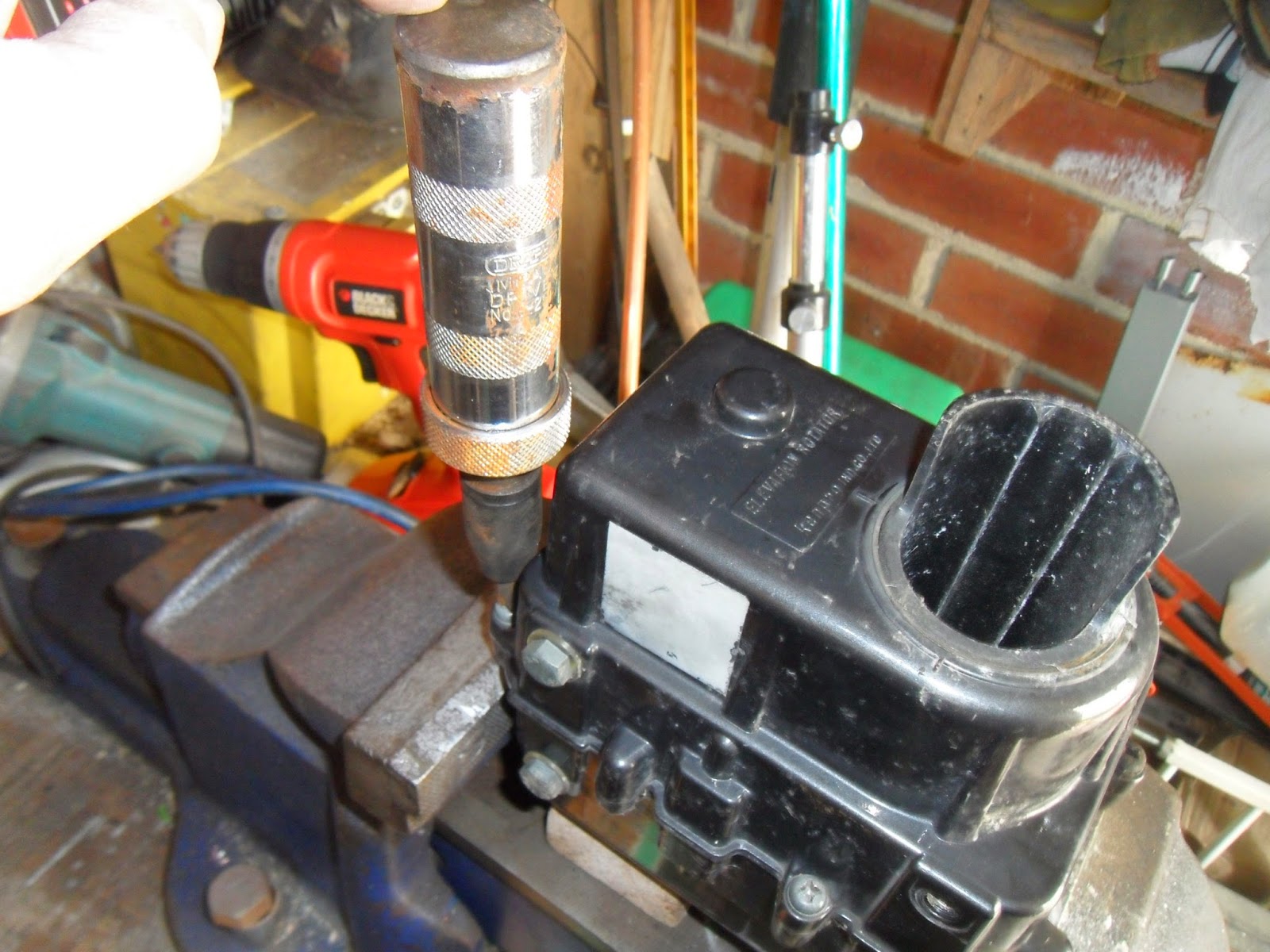 Once I split the case with the impact driver which was easy, I found lots of sandy grit and dried out remains of what should have or once was gearbox/bearing grease. 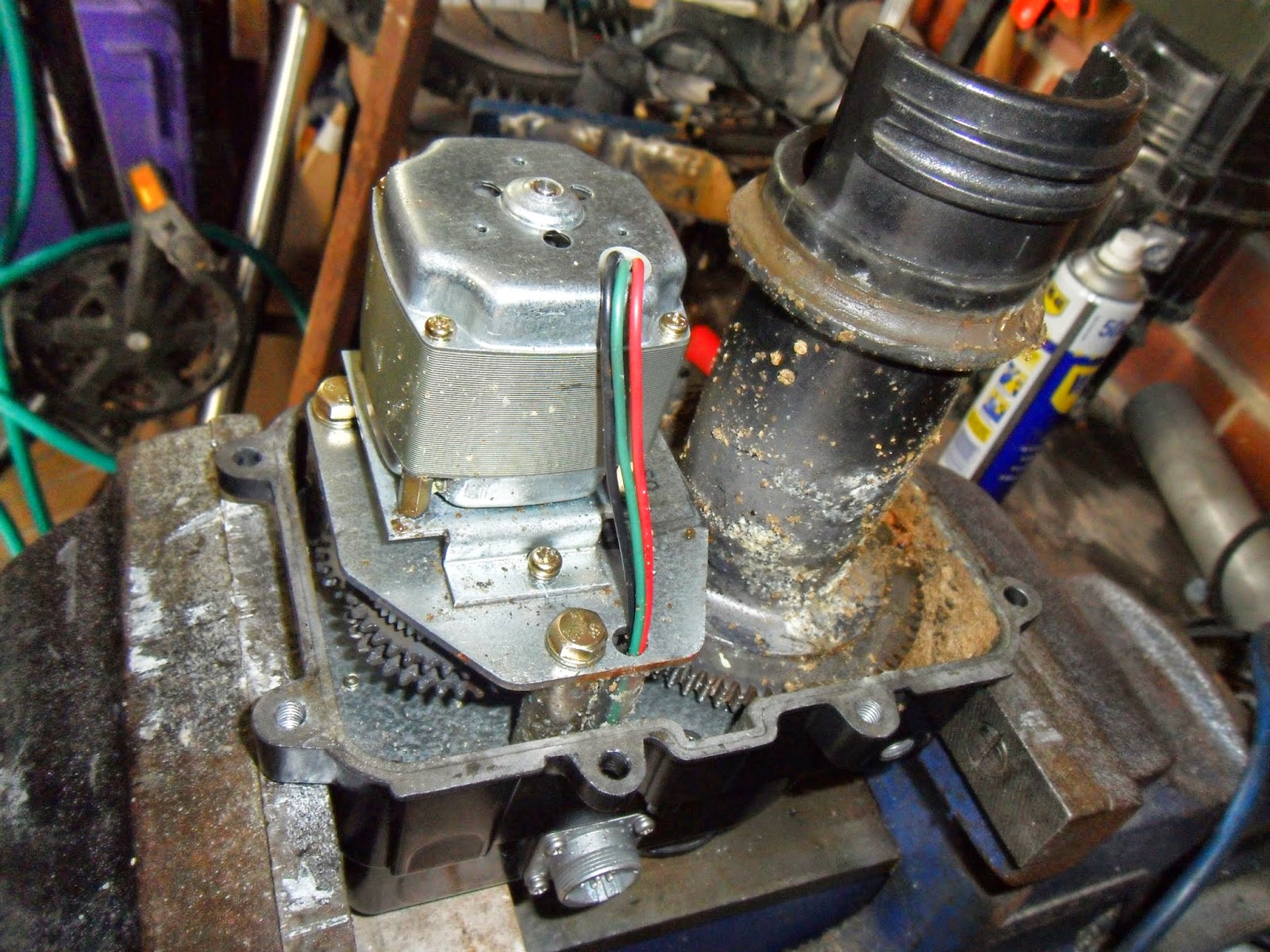 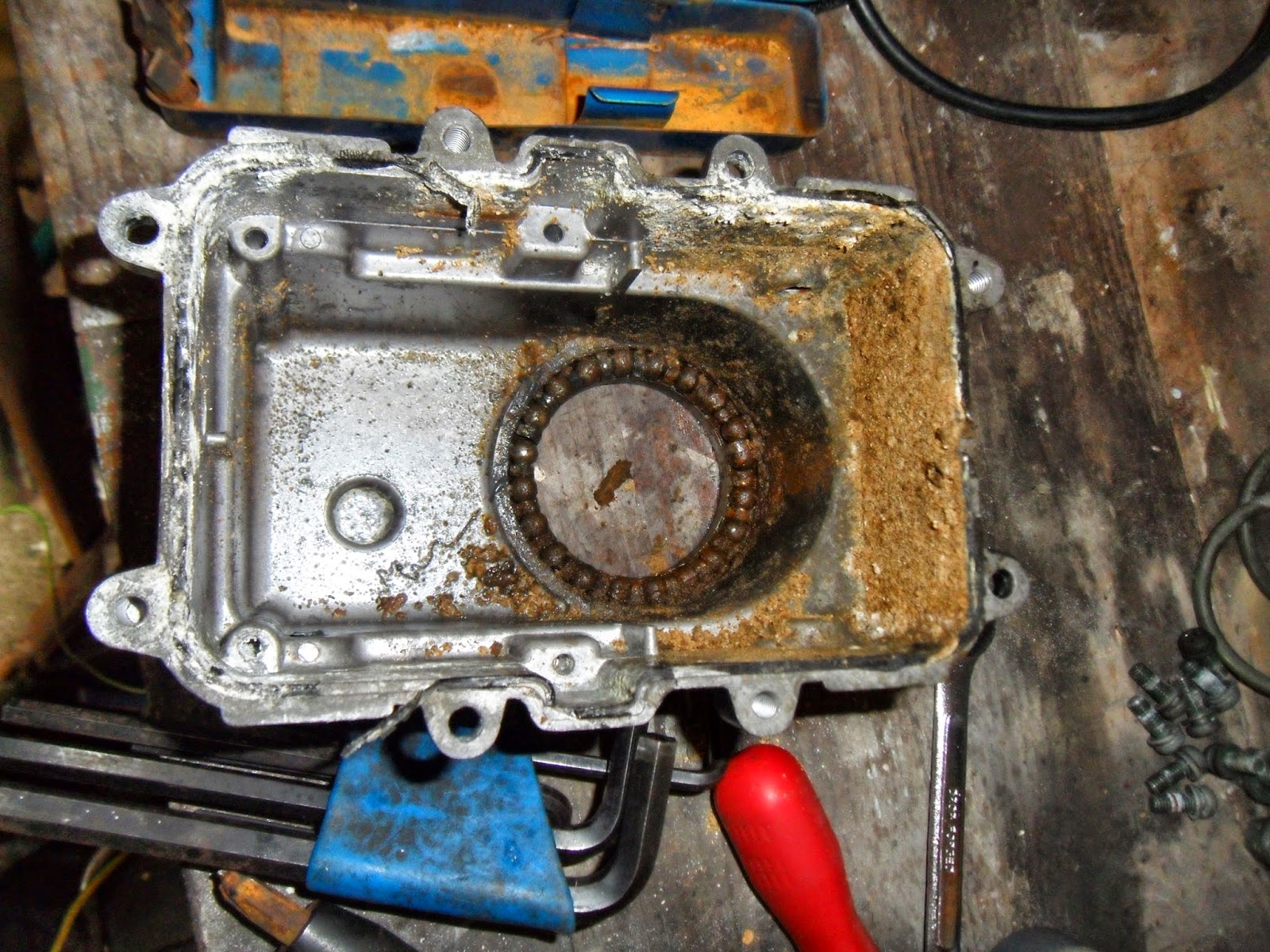 The next step was to inspect the seized gearbox and then remove the main shaft which can only be carried out by first removing the entire gear housing unit.
I started by removing the motor which was two cross head m4 screws, I continued by undoing 3 m6 bolts, which released the gear housing plate to reveal the problem. The gears are supposed to spin on shafts but were all seized solid. I disassembled all of the gear components including the shafts, cleaned them up and then reassembled in the reverse order with fresh grease and copper slip. 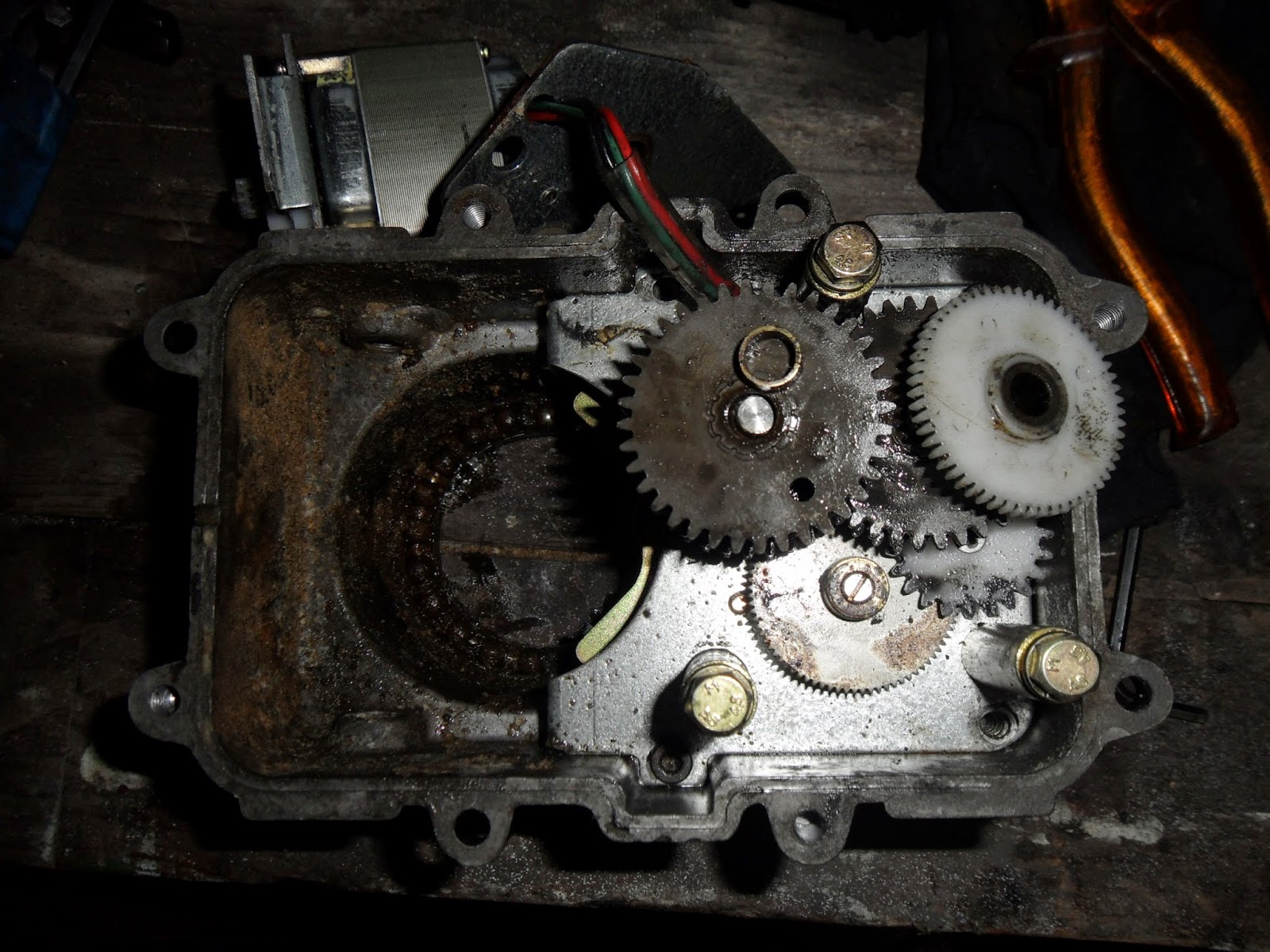 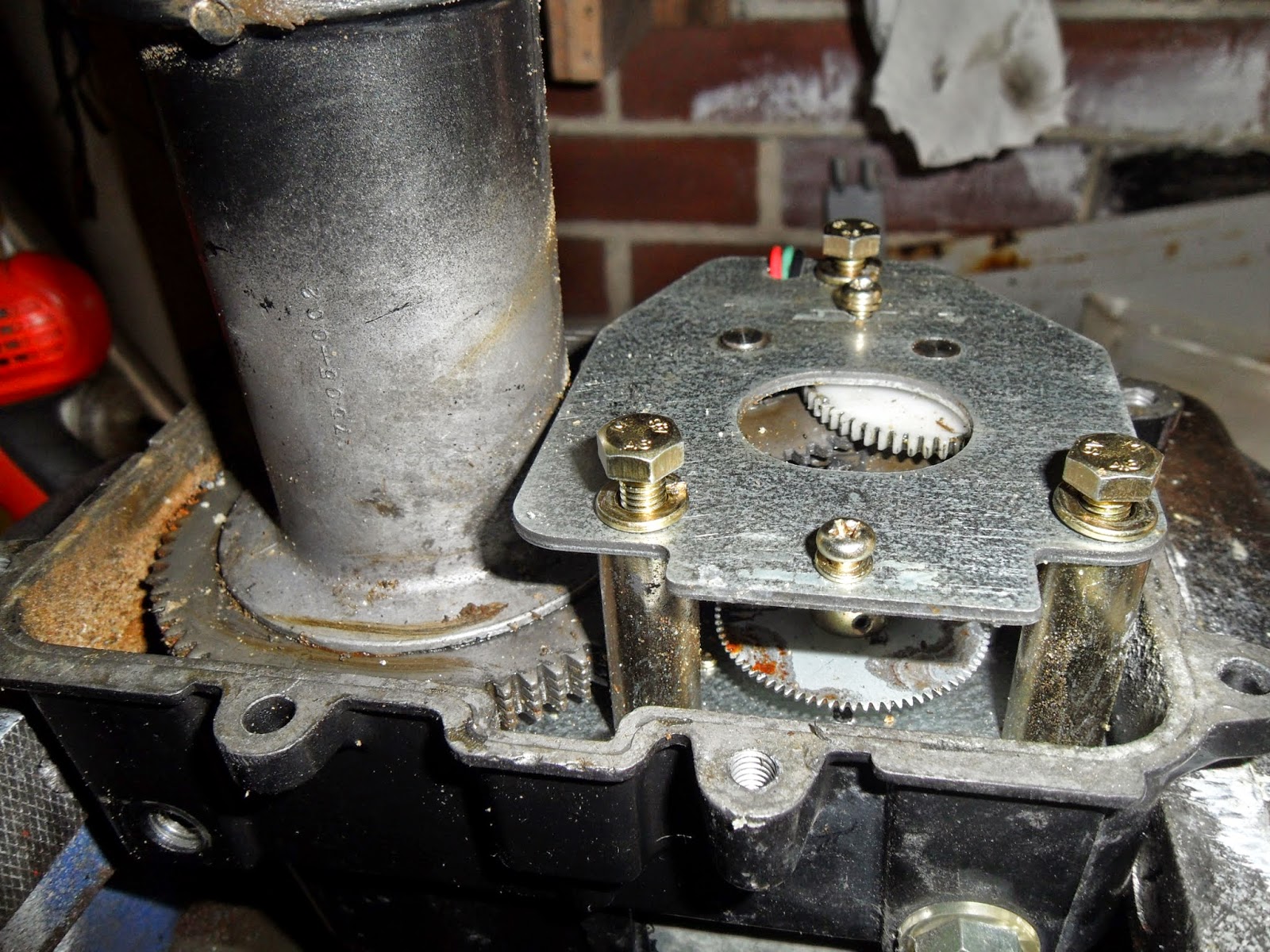 Then I undid 4 small allen screws I think they were m4 but can't remember, either way they came out easily with some quality long reach allen keys which enabled me to  released the gearbox housing and main boom shaft. 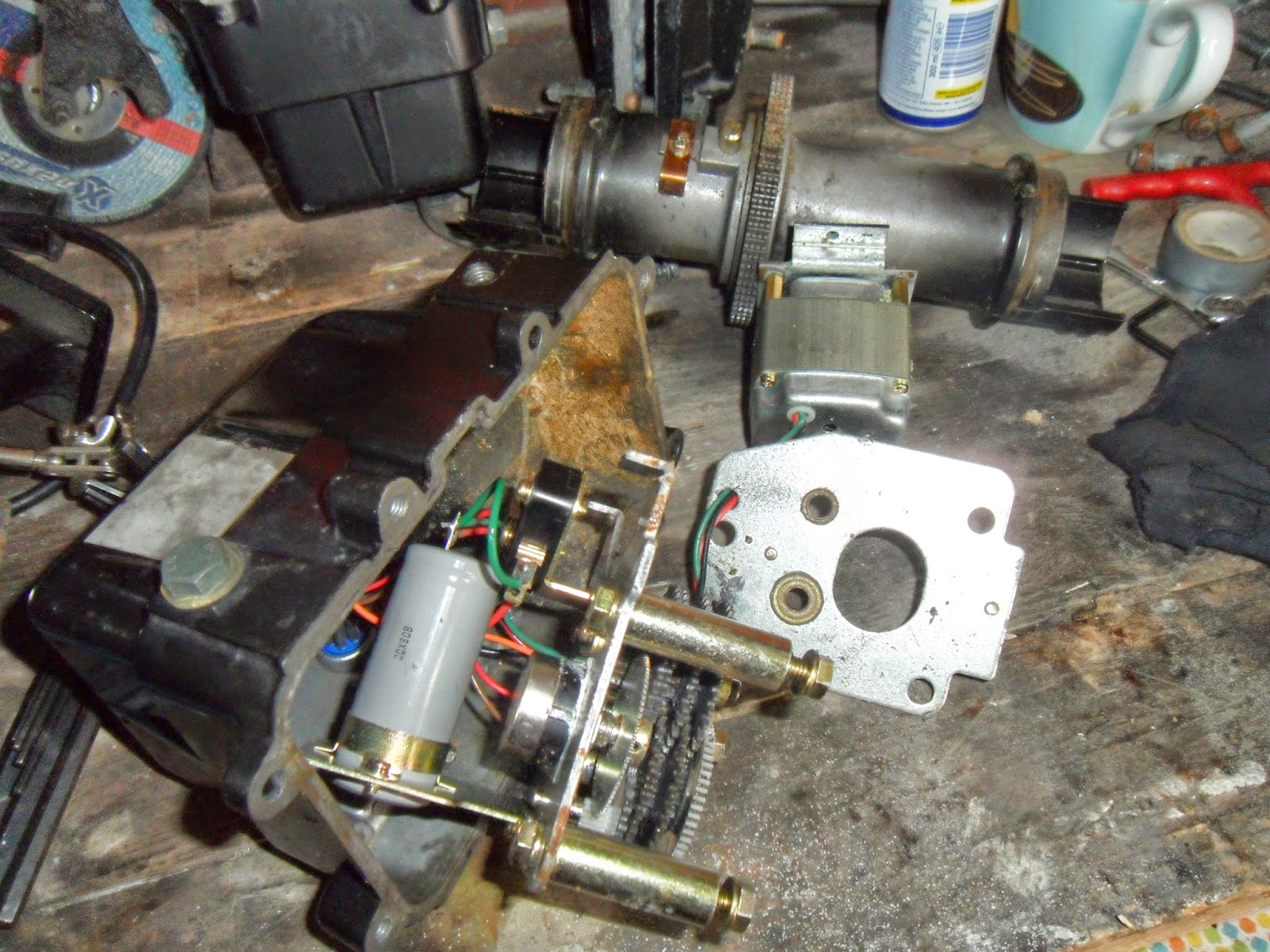 Unfortunately I broke a micro switch in the process which is used to stop the rotor turning Doh? Not to worry I put on my thinking cap and surfed the net. 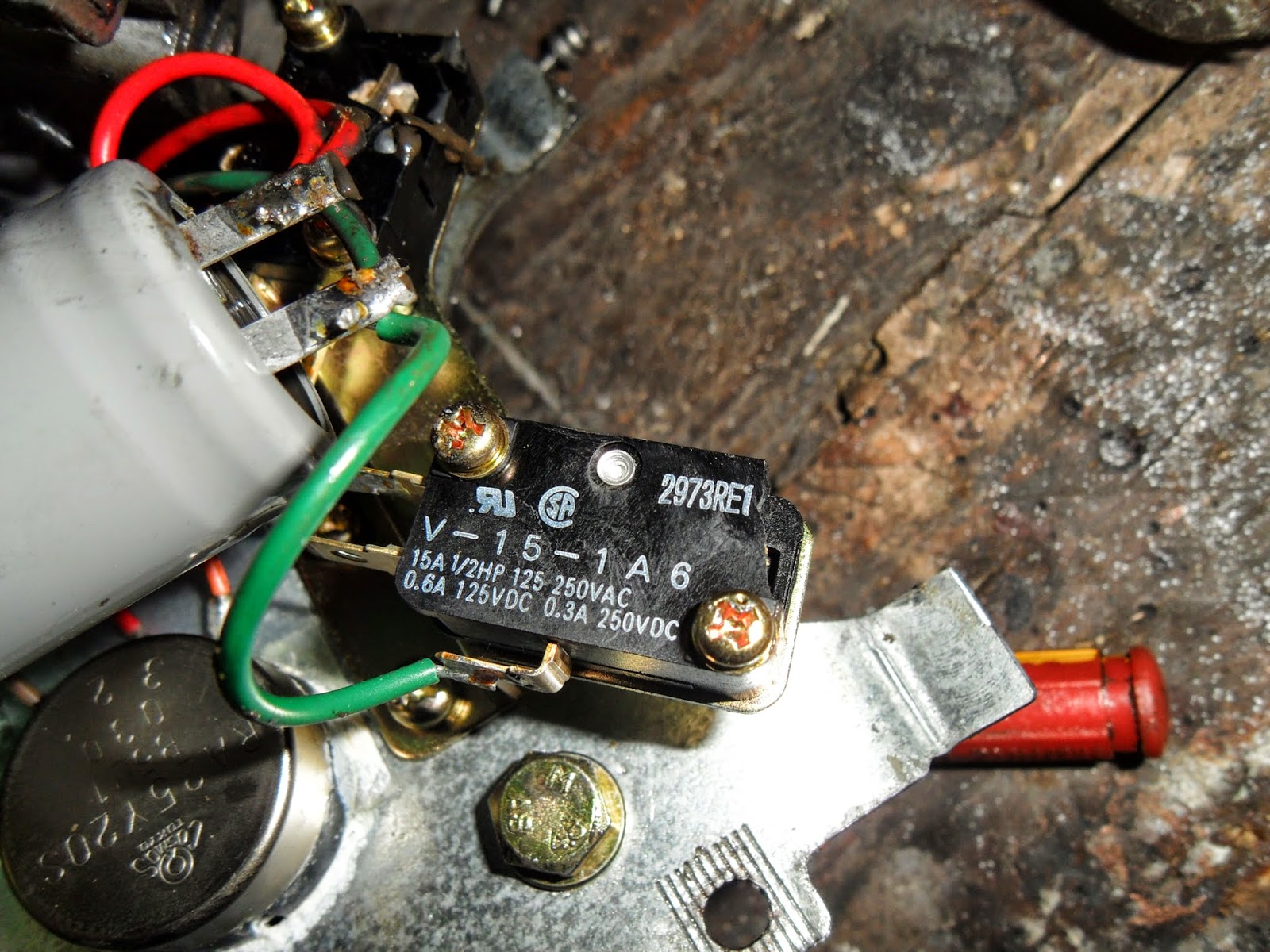 I found some suitable replacements for £2.50 at Maplin Electronics and decided to replace both micro switches to eliminate any near future corrosion issues.
New switches soldered in by yours truly, now to obtain some 5/16 ball bearings. New ball bearings greased up and back in. I  managed to get them locally for £5.00 by going directly down to the engineering supplier in Bradford this was achieved with the assistance of my daughter pulling a really cute face at my side. 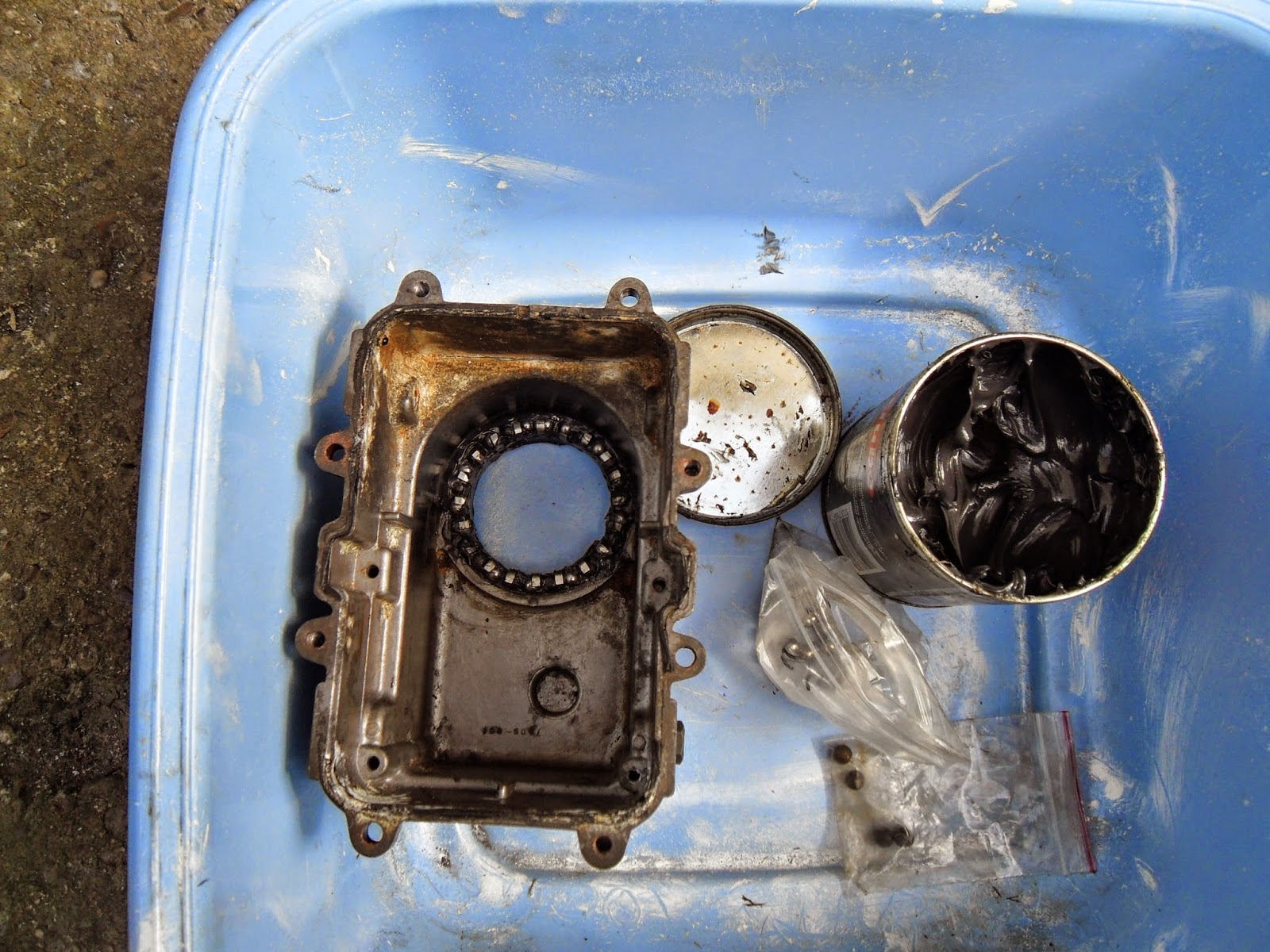 The next job was the position sensor which is a 500 ohm potentiometer that I opened up to find that the slide was completed corroded. I purchased a suitable replacement from Farnell Electronics in Leeds which again I collected at a bargain cost of £9.00. I fitted it and carefully set up the new 500 ohm pots position before I reassembled everything back into its correct place, taking care to line the boom shaft correctly to the elevation sensor which I had marked with masking tape. Again care was taken to avoid anymore broken micro switches. 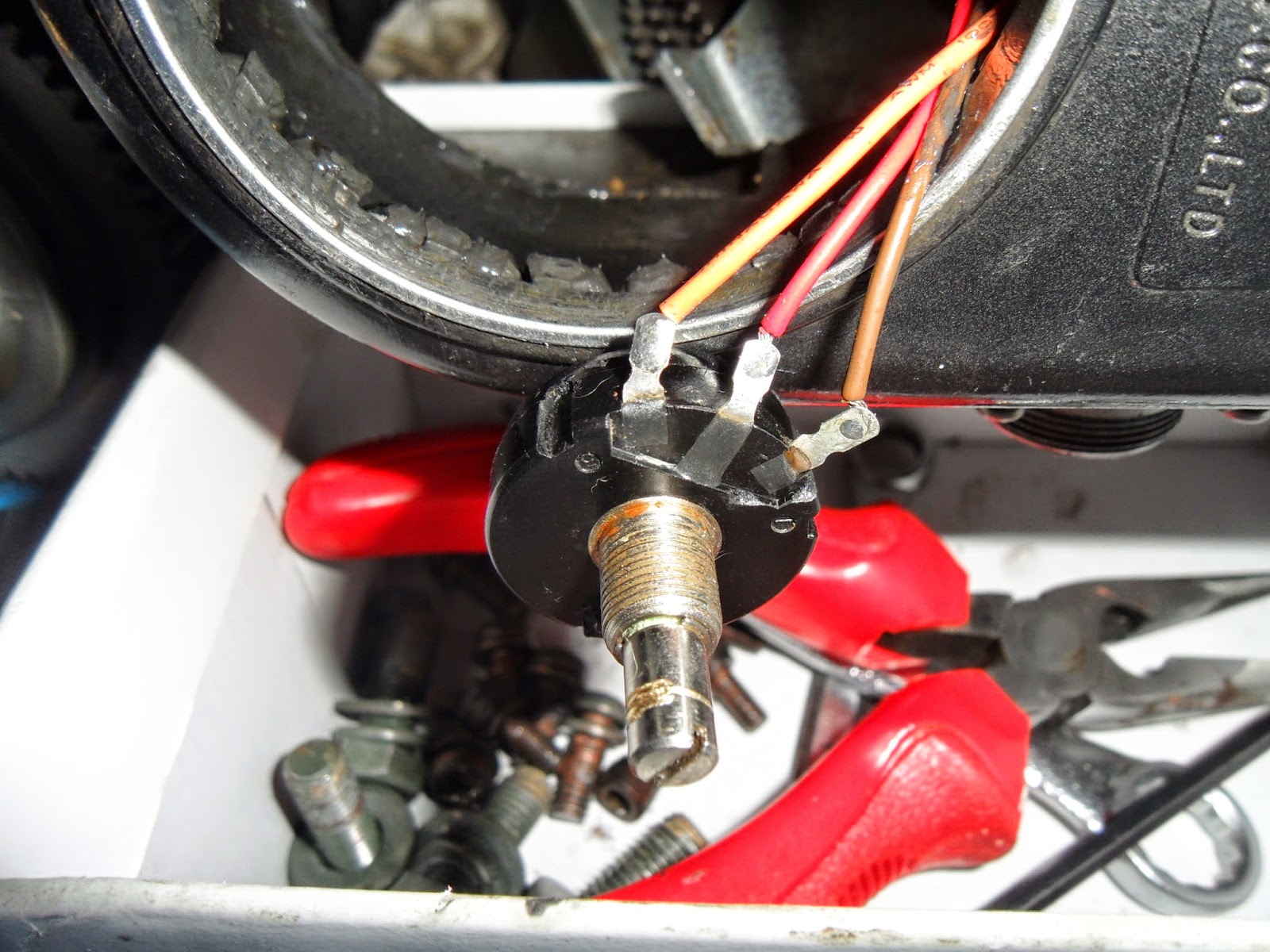 Once everything was back together I tried things out on the ground first to allow me to fine tune any necessary parameters. My bike shed was handy for this. 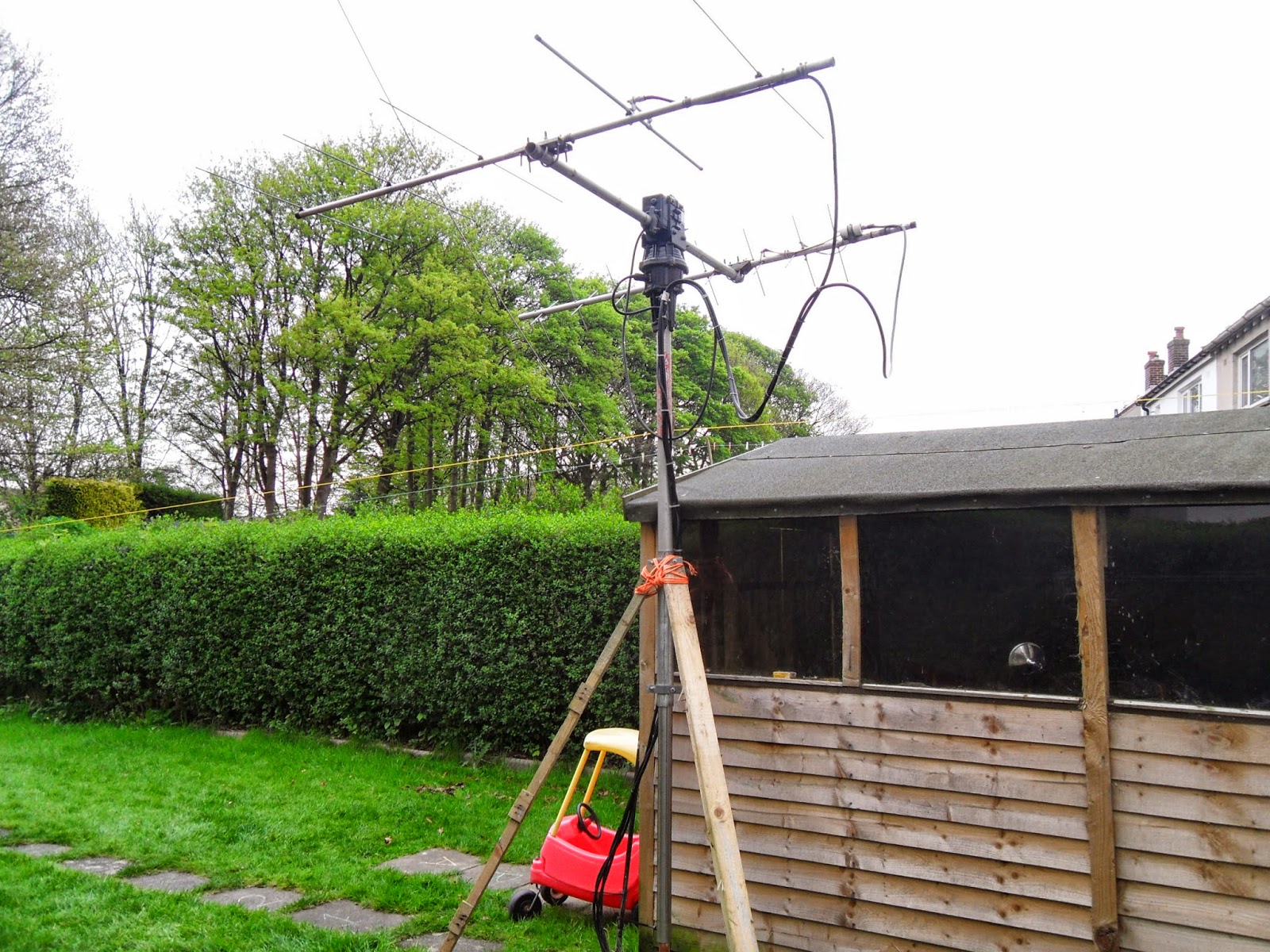 All ok, out with the rope and ladder. The 2E0HTS Satellite station is back on the air for a total repair cost of less than £15. Result!