- February 06, 2008
The Bands have been very unpredictable lately with frequent openings around late afternoon on HF. I was lucky enough to tune around 20m whilst driving home from work when I came across 9Y4W(Trinidad & Tobago). He was booming in 5/9, with a big pile up. I gave a couple of calls whilst on the move, and made the contact from the mobile. This was quite surprising in the middle of a pile up with only a simple mobile antenna. Later on during the weekend I worked LW9EOC(Argentina) on 15M using the FT-767, and Hustler Vertical from the QTH.

The past few days have been difficult conditions during the evening time due to excessive QRN that I seem to be suffering from every now again. The noise levels have been unusually high, probably down to the extreme wet winter weather we have been getting up here in the North Pennines. It’s been gale force at times with frequent weather warning bulletins given out. The wind has visited my QTH quite a few times recently as well as some snow and more rain. The last couple of days have been dryer with sunshine and temperatures of 6c. Hopefully things will settle down back to zero noise levels again and I will be able to hear the more distant weaker signals hopefully working a few of them.

With conditions been up and down and reoccurring high QRN, I decided to operate some PSK31. So I set my self up on 40m again on the FT-767, but this time using the G5RV. There were many stations showing on the waterfall so it wasn’t long before I made some contacts. I had some great QSOs into Europe and had the good fortune to work KP4DS(Puerto Rico) on 40M PSK31 running 35 watts. Today I received his eQSL which adds a new confirmed Country to my log. Thanks Luis KP4DS.

Here is Luis KP4DS eQSL to Me 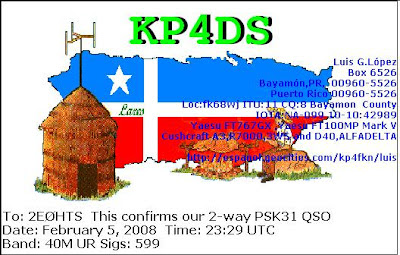 Phaze58 said…
Hello Simon, Lou
Well I am off to the wakefield rally on Sunday.
I am going to get an HF antenna there
even if its only a half sized G5RV.
I am not working for the next 3 weeks , fell down last weds taking baron for a walk and finally popped the tendon in my knee.Doctor gave me 4 weeks off work. (Sigh). I am going to be going even more GA GA than I am already Hi Hi.
I will get on HF come Heck or High water. The VHF co linear is faulty and I need that to come down so I can look at it but not yet , The 6 meter Beam Is Up and OK ( 1:1.5to )
40 meters sound like a good plan Si, I will be doing some PSK31 and RTTY on that and 80,20, 15 etc
soo if you hear a LOUD signal It's Probably Me going H for L
See you soon
De M1PAC
4:35 pm

Sorry to hear about your accident. I hope it is not too painful. Dont think I will be going to the rally as I have too much gear already h.i. Good luck hunting for a decent HF antenna, I hope to hear you on 40m psk soon. It is a pretty cool band it should be fun!

We will catch up with you soon, have a speedy recovery.