- August 18, 2008
The past few weeks I have been exploring the world of VHF by listening and playing around on 2M SSB as well as VO-52. I have had some success on 144.300 with my vertical and home brew Loop with DX opportunities such as GM4PPT (Richard) located in Scotland near to Ayr and one or two other interesting QSOs.

The rest of the time apart from HF operations, I have been tracking VO-52 and trying my best to put a signal into its Transponder and making some QSOs. I successfully had a QSO with DL6HP via VO-52 and tonight's pass brought signals to my Earth Station once again but this time I received them with my new home brew 2M Yagi. Tonight's contact was with G7BTA (Dave) who was approximately 200 miles south of my QTH down in Hereford.

The Home brew Yagi received well but my TX was still going through my vertical so you guessed it, the next job is a 433/70CM Yagi.

Here is the story so far, I used a broom handle, some 3mm thick aluminium sheet, and some 3mm Brass sheet.

I cut the sheet on a 6mm capacity guillotine with a 3 meter wide bed, which allowed a full 3X2 meter sheet to be cut. The aluminium elements are 15mm wide and the brass driven element was cut at 20mm wide. 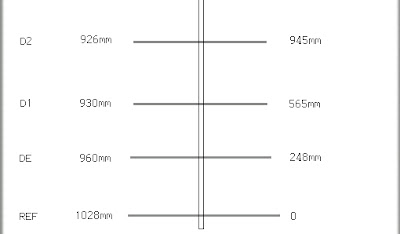 The Image below shows the finished project assembled to the Broom Stick. 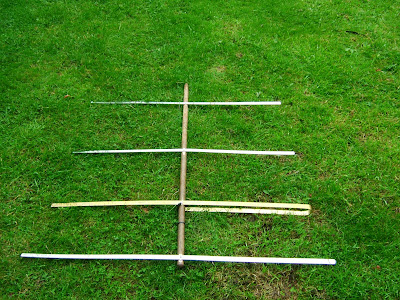 You can see the Three 15mm x 3mm Aluminium elements and the Brass 20mm x 3mm active driven element which is folded at one side creating optimum performance as well as 1.1 SWR across 144-146 MHZ.
The total length is 960mm wide + 480mm (folded element) + 35mm space between top element and bottom folded element. Total size was 1475mm. 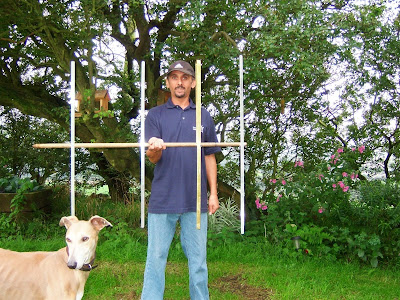 Here you can see Me holding the Broom Stick Yagi, with My Dog Dudley assisting the installation.
I used the flat strip rather than round bar mainly because it was at my disposal at the time.

I will probably build the 433- 437 MHz Yagi from welding rods which are round. This Yagi was simple to build using screws and the wooden broom, but now I can no longer sweep out the shack as the broom has now become my Boom. h.i 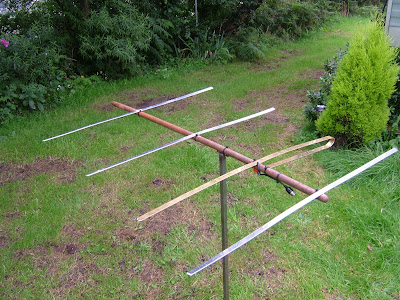 The next stage is where I fixed some box section to the base of the Broom-Boom, here you see the yagi in its horizontal state.

The next image shows the Coaxial feed line which the braid is taken to the centre of the top part of the Brass Driven Element. 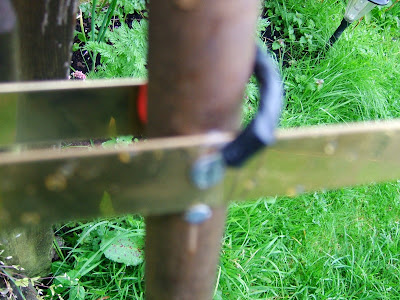 Here you can see the Coaxial inner which is connected to the bottom folded part of the Driven Element. I used a plastic spacer to obtain the 35mm clearance from the top part of the Element 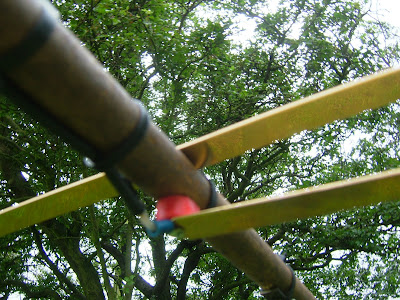 Another view of the Feeder which is 50 ohm Coax. 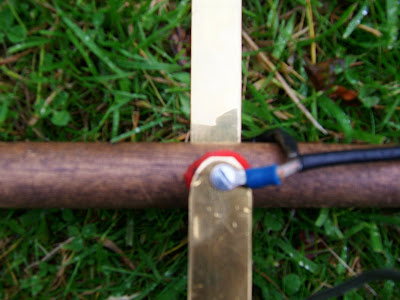 And of course as usual ,I like my antennas away from nagging/complaints so once again the Tree provides height a well as stealth. ( I did straighten and line up the elements once I set everything up) 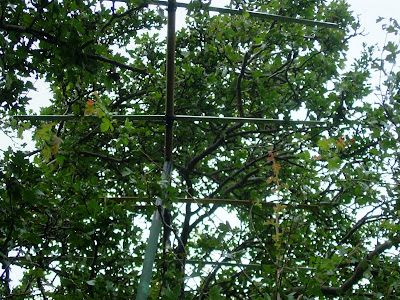 This one is a prototype, Once I have given it a serious testing I may construct a Dual band yagi similar to the LEO (Low Earth Orbiting) Satellite antenna, which should be arriving from Antenna warehouse USA any day soon. I am hoping to use the commercial Arrow antenna which is hand held with my Hand Held Radios and operate via AO-51, more about that in the near future and maybe I'll try to make something similar.

In the meantime thanks for reading and if your thinking about trying a Broom stick Yagi like this one, I hope you have as much fun and enjoyment making it like I just have had.

It does seem to work very well within the short time I have tested it, and I am feeling confident it will be a big improvement especially on SSB.

But no M1PAC. I have been listening on 144.300 and heard a GM4 5/2 on the beam 5/0 on the Vertical. Pretty exellent result considering its pointing south and recieving Scotland from the back of the beam.

Last night whilst monitoring VO-52 145.910-145.890 USB I recieved it 5/5 whilst it was over North Africa on the Beam long before my usual vertical started RXing. It definately seems to be working well on SSB.

See you soon and if you want a chat tomorrow I'll take my Hand Held to work as I am the only one in the workshop till September.

Tomas said…
Nice antenna, Simon. Congratulations to your contacts via satellite. Have a fun ! I think Delfi-C3(DO64) is currently in transporder mode, otherwise it transmit telemetry. I heard it on W3DZZ(hf antenna) but pretty week.. Anyway, your new antenna has better performance :-)

Nice to hear from you.

Thanks for the information regarding Delfi-C3. Its a new one for me so I am very pleased to add it to my list of potential Sats to try work ;-)

Today I received my Arrow Satellite handheld antenna as seen on youtube. I will be posting more info about it when I get the chance to take some pictures and Familiarise myself with it!

73 Keep up the good work with your new site, its looking good so far.

Ive added a link from my site so anyone reading this can check it out.

congrats to your new arrow antenna. I am looking forward for some post or video when you hunting the satellite.

Thanks for linking our website, we will do our best. Stay tuned :-)