- January 23, 2010
The first Twitter Net was a lot of fun despite the 80M band being a little difficult for into G at the times that we have been running the net. However the Thursday Net still had plenty of us trying to get our signals back to each other with some nice QSOing had by all that made it in.
Unfortunately my first NET QSO was shorter than I anticipated as at the time there was around 3FT of snow covering my dipole ladder line, which after around 5Mins of TXing shorted out the feeder and caused a very high SWR reading back in the shack. I was forced to continue monitoring the Twitter Net in SWL mode but could still pass reports as “Tweets” to the #TWNET that were monitoring Twitter at the same time. Before the Snow shorted the feeder, Tomas OK4BX Tweeted that he could hear me in Czech Republic along side the other Stations that were also operating on the Twitter Net.
Tomas OK4BX kindly interfaced his Icom powered Shack with his web cam and streamed his side of the Net live over the internet which he shared with us all by linking the live video stream to the #TWNET Twitter page. This allowed all to see and hear how we were coming through on 80M in Czech Republic. Nice idea Tomas – Thanks!

Once the Net ended on 80M we decided to QSY to echolink where we all connected to a Repeater and managed to work a few more Stations that didn’t quite make it on 80M, it was fantastic to see so many Stations were keen to make it into the Twitter Net by any means necessary. Thanks goes to all who joined in!

We enjoyed the previous challenge so much that we decided to try it all again but at a different time which was early on Sunday morning at 10.00 utc. This proved to be a lot more successful for into G-Land.
I had been busy outside they day before installing a new feeding system to my 80M Dipole. I had decided I would try something slightly different from the open ladder line feeder and ended up fitting a balan at the dipole centre, fed with RG58 heavy coax which should keep out any water as well as other possible shorting problems with any luck. The performance has remained good and the Dipole seems to tune up well on 80M right through to 10M, I can also get it to tune down on 160M which was previously not possible with the ladder line fed Dipole.

The Dipole worked well for me during the Net and has continued to perform well on 80M and 40M throughout the week, with some good reports from N.America being obtained. I also got into Cuba with the Dipole down on 40M which was another good report for the humble antenna. I may consider changing the flat top configuration for an inverted Vee set up just to see how the performance differs in the coming week if I get some spare time.

At present my HF antennas consist of an 80M Dipole, 20M Delta Loop and the Hustler 6BTV which I’m pleased to report are all still doing a good job for me as well as giving me a varied pattern of reflected and radiated signal patterns across the bands. This choice of switching between the antennas is proving to be a very advantageous luxury, as the difference in noise, signal quality and strength varies between them all dependent on the time of day and band/conditions. The change in the height of the Ionospheric layer are responsible for this and are noticeable with each of the antennas when the switching of horizontally and vertically polarized signals is carried out, often with massive differences taking place of up to 20db.Dependent on the time of day I have found that all three antenna’s out perform each other with no one antenna being the overall best.

I should be back on 80M with the Twitter Net Sunday mornings at 10.00 utc and again on Thursdays at 20.00 utc.
So far, we still haven’t managed to arrange anything for the other bands such as 20m and 40m.
I am interested to see if we can work some of our State-side and European friends that have been in touch already on Twitter confirming their interest in trying to make the QSO. I hope to it make soon Guys!

As well as all this twittering on, you can see I have been playing quite a bit of radio across the bands already this year and I aim to continue my radio antics more than ever.
Check out the graph by clicking on it to enlarge. The graph shows where on the bands I have been active this month so far. 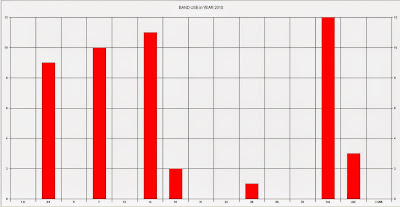 Tomas said…
That was you, who was signed all the time of my broadcasting ? I just realized that live broadcast via ustream is possible within few seconds, especially when (T)RX is connected to some soundcard. It was nice experiment how control ustream enverioment and show you how your signals reachead here and what conditions were on my side, I think.. I really like when hamradio is fun and I can learn anything new about radio, computer or foreign language. I am staying tuned and thanks for the fun my friend!

MØYKS Simon said…
Yes it was me! lol I enjoyed it very much. Great job with your shack streaming for us all to see.

I am glad you are having lots of fun and hope to speak with you on the bands very soon.

All the best to you and all of the BX Family.

Keep up the good work Tomas and keep tweeting ;-)