- June 26, 2010
I have owned my trusty FT-470 for over 6 years and have worked many DX with it whilst working through the FM Satellites.
I’ve used it whilst out and about Mobile as well as lots simplex and repeater use for years with excellent receiving capabilities compared to the more modern Hand held’s. I have been running with AA, NiMH 2.300mAh 1.2V Rechargeable battery’s housed in a Yaesu FBA-10 Battery case, which still works very well with hours of quality operating time.

About a year ago I managed to acquire a second FT-470 from a local rally for a bargained down price. The latest FT-470 came with an original FNB-10 - 7.2v 600mAh Ni-Cd Battery pack that held its charge for about 15 minutes whilst receiving and a lot shorter when transmitting.
To get around the faded FNB-10, I have been using the latest FT-470 with the PA-6, Dc Car Adapter/Charger, fed with a 12v Motor Cycle Battery and the original FT-470 on the FNB-10 Ni-Cd pack whilst hooked up to the Arrow Sat antenna.

I like the performance and look of the paired FT-470’s strapped to the boom but found the trailing power lead into the second FT-470 unit awkward and cumbersome. I had a quick reminder of the specs in the FT-470 Operating Manual where I read the unit would work from as low as 5.5VDC up to a maximum of 15VDC. 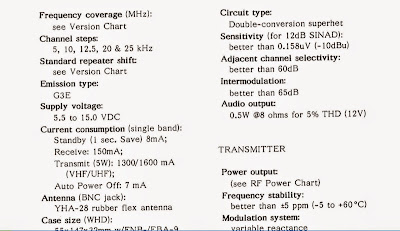 I had recently been given a box of 12, 9V PP3 Type Battery’s and I had a couple of old dead FNB-10 battery cases I wanted to open up and fiddle around with.

I cut out the original rechargeable cells and soldered in a couple of quick release battery leads which would fit the PP3 9V Battery’s. The new leads can also be used later for a future plan which will be to find and fit a cradle to house some more AA, NiMH 2.300mAh 1.2V Rechargeable cells into the old FNB-10 case. 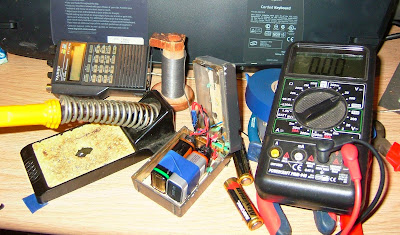 I decided to connect two 9V batteries in parallel circuit to the old battery case connection point. I can now power up the second FT-470 to receive the Satellite down link frequency for a lot longer without fading allowing the use of the original FT-470 for the Transmit uplink Frequency running my Rechargeable Ni-Cd Battery pack. I can now get a few days of use out of the two PP3’s as opposed to 15 minutes if I’m lucky or a power lead and adapter wrapped around my legs. Hurray! I now have two FT-470’s working well! 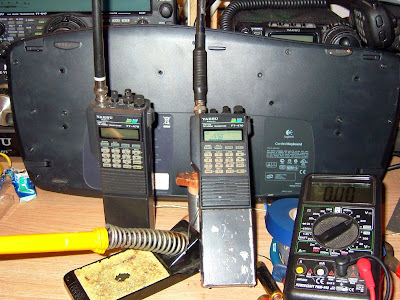 As usual I enjoyed getting the soldering iron out and having a play, I am pretty pleased with the result and I will be looking out for some kind of cradle to house 6, AA Battery’s to be used for my next FT-470 job.

In the meantime I can use my long battery life Kenwood TH-F7 for dog walking and when I fancy a few more bands the FT-817 is always fully charged and ready to roll.

The QRP side of Amateur Radio for me is what its all about, I have had some superb Satellite and SOTA contacts operating with the minimum amount of power that I need which is often less than 5 Watts. Long live my exceptionally good pair of old, but still up to date performance wise - Yaesu FT-470 UHF/VHF FM Handie Transceiver’s.

Unknown said…
the 2 9volts are not to much power? just asking becouse I have same radio and trying to get it to power on. It came with aFNB-17 battery pack. So full of corrosion I dont know what to do to power it on. I tried a 9volt battery just to test it using test wires pos+ to pos+, neg- to neg-. No power. any sugestions?
8:32 am

MØYKS Simon said…
Hi Blair, I wired the two 9v battery's in parallel to supply more power for longer life. By putting two pos+ together and two neg- together you can ensure 9v this way. As for the no power problem have you tried connecting the battery's directly to the old damaged packs wiring. I removed the damaged cells and wired the 9v battery packs directly in place and connected up to the old packs wiring.

Hope this helps as the FT470 is a great peace of kit. I have seen new off the shelf replacement copy battery pack for £35 online. good luck. Simon
5:36 pm