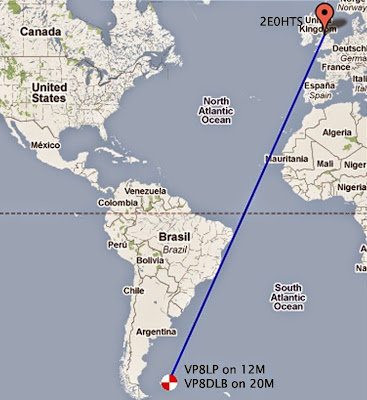 I recently added some more radio gear to my ever growing collection which comprises of a few more antenna's and a Ft-1000MP Mark-V to help bow the shack table some more.
I strung up a Carolina Windom 160 by Radio Works last weekend which joins my collection of home made delta loops, wires, beams and verticals. You can never have too many radios or antenna's hi hi.
Since the the CW160 was up I have made lots of great QSO,s on 80m, 40m, 20m, 17m, 15m & 12m. I have yet to try it out on 160m, 30m & 10m but the results so far on the other bands have been very surprising.
The antenna is 265ft long and is suspending by trees in a more or less straight line and it is nice and stealth like not causing any complaints so far which always helps to keep things peaceful.
The new addition - Yaesu Ft1000MP MK-V fine tunes the antenna well using the onboard atu, the antenna is less than 2:1 at worst across all of the HF bands and is at 1:1 on 160m without the atu in its present configuration.
I've put good signals into K, VE, CO, 7V & CU on 18m using the CW160 and WX, K, TR, VO, VA, CO, & VP on 20m. VP also on 12m. On 40m & 80m the CW160 is working as expected putting out a big signal whilst receiving a very low noise level, I have heard plenty of JA coming in on both 40m & 80m at around 5/7 signals.
The highlight of this weeks radio activity from the shack has got to be working TR8CA - Gabon on 14MHz and best of all was VP8LP - Falkland Islands on 12M where I got to work bob for a second time at a distance of 8000 miles.
I got lucky again Saturday evening on 14MHz and managed to work VP8DLB also on the Falkland Islands. The picture below shows the MK-V receiving VP8DLB - Gary at 5/7 through the CW160 which at the time was the strongest performer out of my Hustler 6BTV and Delta loop which I kept switching between. 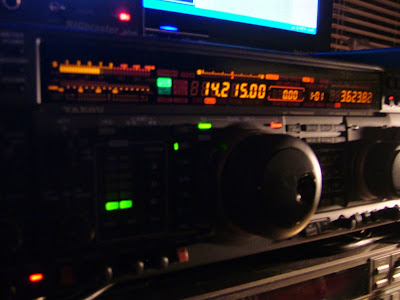 I am really enjoying some of the nice openings that have been happening of late with QSO's over very long distances becoming a daily occurrence, I have also worked a few nice openings into VK from the mobile again, whilst driving to work in the mornings.
Hope to catch some of you somewhere on the bands, thanks for passing by & best 73. Good DXing!

Phaze58 said…
Congrats Si.Green with envy, but having a great time with the inverted L vertical traped fishing rod thingy.It works well on my New yaesu FT-950 I can use 80m & 40m without the ATU , and it tunes up nicely on a few of the other bands. I use the mini beam mostly on 20m coz I can swing it around. can't wait to put that on top of the scaffie pole .Keep going mate & Good luck
11:48 pm

MØYKS Simon said…
Thanks Phil, I am well chuffed with the new kit.

It sounds like I am not the only one with the new bits and bobs! Glad you can work on 80m now and I hope to hear you on soon.
Your mini beam sounds interesting is it a Cushcraft MA5B or something else?

Phaze58 said…
it's one of these SI only a bit old but its an MQ-1mini beam, ya know it you braised acouple of radials for it. its adam's old one .
1:39 pm

lurchermanuk said…
Hi Si finally signed up to this blogger stuff been some nice opening worked more Ja and a new one 9m6 today (sunday)missed the lad in Thailand on saturday as he had a yorkshire accent and i thought he was a local lol see you at work this week when ya can tell me about the vp opening ..best 73s Dave
10:18 pm