New Shack is on the AIR

- January 22, 2011
We have been in our new house for a month now and at last I am starting to get through some of the decorating and DIY that is required when moving in. With less than 5 weeks to go before "baby HTS" will be with us you can imagine the QTH is undergoing a serious facelift with the smell of paint becoming the normal everyday occurrence.

Over the last couple of weeks I have managed to temporally install 3 antennas allowing me to operate on HF and also hear local activity on VHF. The 3 antennas that I have erected for now, are a 135ft dipole with ladder feeder for 80m, a Hustler 6BTV (6 band trapped vertical) 80-10m and a tri-band vertical covering 50MHz, 145MHz and 433MHz.

As of yet the satellite antennas and new GS5500 azimuth/ele rotator set-up, is still collecting dust as a nice long ladder or scaffold tower will be required to go ahead with the satellite install. For now working the Sats will have to be when I am at my Portable shack on the Moor.
As you can see in the background of the image below which shows the 6BTV, the Moor is less than a mile away as the new QTH is situated on the edge of the lovely moorland. 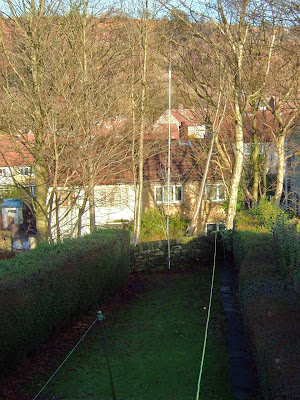 The Hustler 6BTV HF Vertical antenna is ground mounted in the same way as my other 6BTV at the now portable shack. Here at the new garden The SWR is 1.1 without the ATU from 40m right through to 10M. The vertical tunes 80m up well with the ATU in line and has a very low noise level on receive. So far I have worked across the pond to the US on it with ease, I also heard some nice VK and ZL signals coming very well, as well as hearing signals out of HS land. 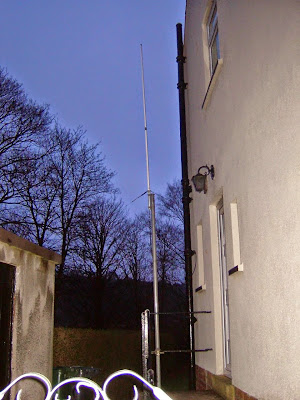 The tri-band antenna works reasonable in its very temporary position but I am sure it will be greatly improved once it is up high on the top of the house.
Louise will also be a bit happier hi hi. I dont know what she means when she says "it looks stupid there" Lou knows it wont be there for long!

The main problem I can foresee is how to evict her from my favorite seat in the house? As you can see she is not in a hurry to give up the shack seat just yet. If I do some more decorating maybe than she will move over and let me get to my lovely radios h.i 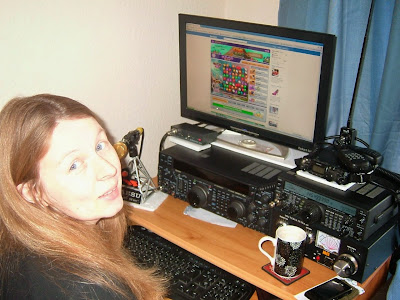 For those of you that were wondering about Dudley the DX Hound, here Dudley can be seen getting himself acquainted with the living room carpet which lets face it looks like a great spot to catch some Zs if your a four legged type. 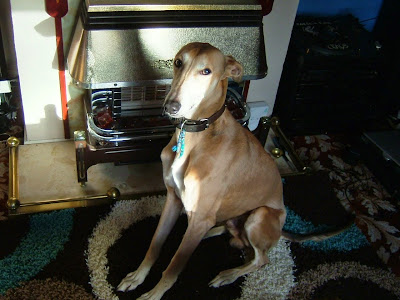 The HTS family is settling in very well indeed, however if the decorating gets a bit much a quick drive up the road takes us back to the Moor Top Holiday Shack where my other Hustler Vertical, CW160, Delta loop, IO-10 Sat beam and Rigs are awaiting me.

73 hope to catch you from the new QTH or portable Shack on the hill.

PE4BAS, Bas said…
Hi Simon, glad you and Louise are settling in the new house. From what you've set up for HF it seems you got a lot of room outside. Well, "bejeweled" is very adictive I know. My XYL plays a lot of games as well, I immediately recognized the picture on your shacks screen ;-)
Luckely my XYL bought her own laptop years ago. So I've no competition for the shacks computer...
73, Bas
5:15 pm

Paul M0PCZ said…
Hi Simon, re the Hustler, are you using any counterpoise wires/RF ground with that ?

MØYKS Simon said…
Hi Phil, thanks for the comment.

Glad you still got some radio gear, not heard you for a while?will listen out for you. 73 Si

p.s if you get too skint you could use that pole and fish for some lunch maybe?
8:52 am

its a big job moving into a new home but we are getting used to it and enjoying the extra space. The garden is around 140ft long so it is perfect for radio antennas ;-)
It will be a while before I set up my antenna farm hi hi.

"bejeweled" yes, very addictive. Louise enjoys playing these kind of games, it helps her relax. Luckily we have two lap tops as well as my pc, I will have too insist she uses one of them a little more hi. Just 1 month to go before there will be a new ham in town ;-)

best 73 to you and the family

MØYKS Simon said…
Hi Paul, nice to hear from you. At present this hustler is ground mounted with a 5 ft length of solid 1 1/4" round bar that I hammered into the ground.

The antenna is resonant 40 -10 with swr less than 1.1 all the way through without radials. I tune it up for 80m with the ATU.

I am going to add lots of radials as soon as poss. My other 6BTV which is located up at my now portable shack has a few radials made from 4mm diameter earth wire and they are cut for 20m.