As we move into the last couple of months of 2020 which has been defiantly a year to remember for obvious reasons, we can look forward to getting back down to the lower HF bands such as 80m.

I really enjoyed the winter DX last year and made plenty of good qso across to USA, Canada, Caribbean and South America whilst operating on the 80m band.

This year I have the 40m/80m home brew Fan Dipole which has already proven to be an awesome asset to my HF station. For those of you that have been coming back to my call on the regular YouTube live streams you have already sampled its performance h.i. Thanks for the super qso's guys, I look forward to catching you all again over the weekend this coming Saturday evening about 10.30pm local (21.30 utc).

So, the homebrew Fan Dipole worked out well for me. I must admit I am quite impressed with it, I have some brand new SOTA beam wire reels in my possession which at some point will be used to build a brand new replacement which will be cut to the same length and installed to the same fixing points and configuration. At present the Fan Dipole is up at 30ft with each leg fixed in a straight line face North to South with a total length of 131 ft. The SWR on both bands 40 and 80m is 1:1 - 1:4. 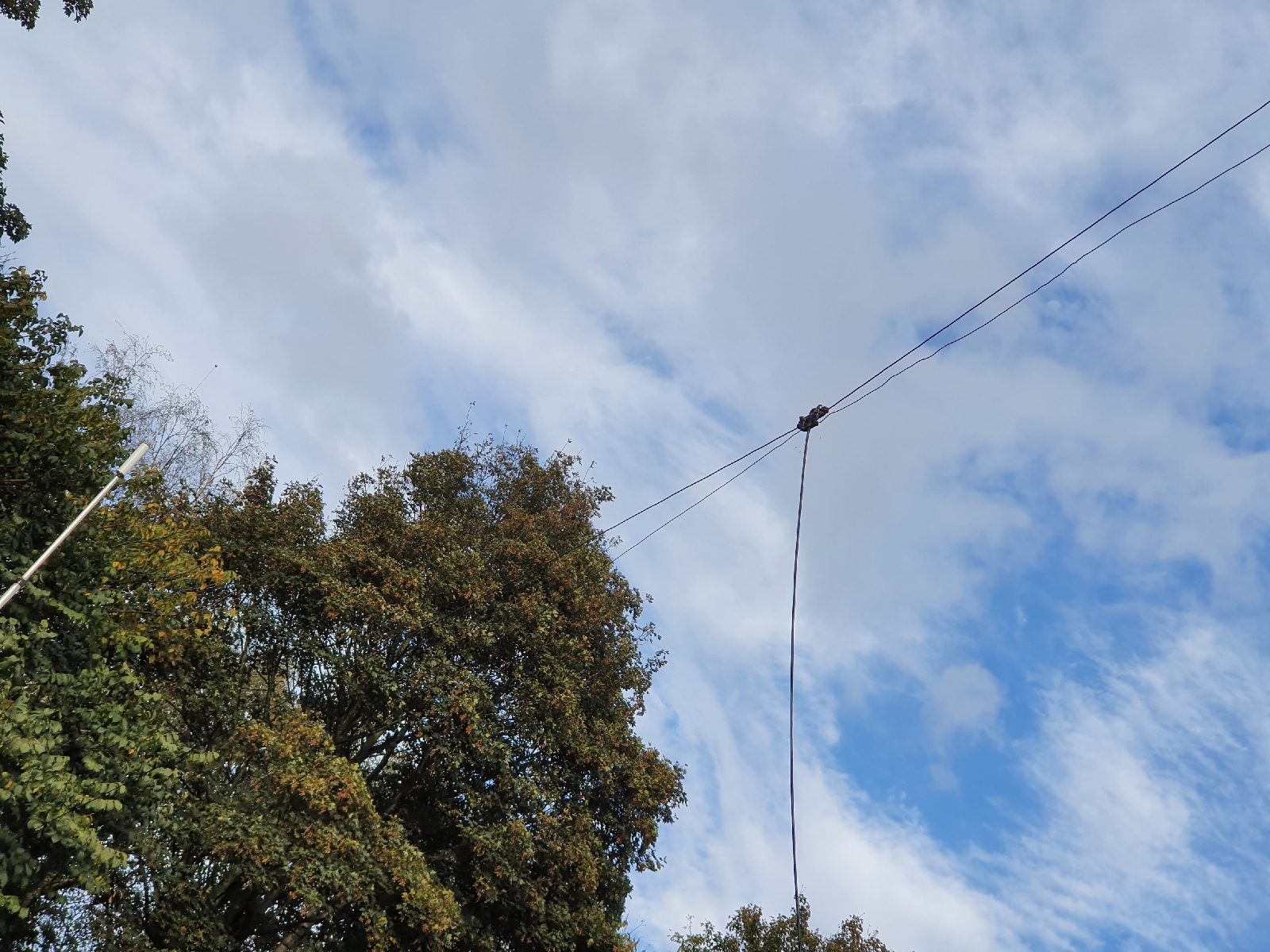 This week I made a 80m DX qso across the pond and worked Big Gun remote Op Ray W2RE on the DX portion of the band. I was 5/7 at rays end and it was quite early in the evening over at my QTH and daylight in the USA. I have also worked into Canada recently and heard other North American signals coming in well recently. I am expecting plenty of decent signals from now on as we draw closer into the winter months down on the 80m band which I will use the Dipole and amplifier to make some good DX. I will also enjoy hearing the old timers make DX in the early mornings as i eat breakfast and drown myself in coffee. This is almost a religion for me during the 80m DX season and I hear the same 80M DX chasers year in and year out. I enjoy hearing them on their switchable four square arrays and obviously when they are far away and exotic I love trying to work them. Its a good time to get on 80m if you haven't done it before and listen to how some of the seasoned DX operators work others, they also will be interesting DX nets on an evening run by experienced radio amateurs out of Europe and North America. Most of these radio amateurs will come back to your call if you follow the DX code of conduct which is basically be patent, polite and listen for your opportunity to call. Sometimes you wont hear the stations that they will be hearing so you have to sit on the side and listen for a while first. Its great fun and like I said already well worth trying out if your new and haven't yet.

Other bands such as 40m are generally good for DX all day and night during the next coming season and again the 40/80m fan dipole seems to be a kick ass antenna for me so far. I also have the 6 band vertical - Hustler 6BTV and recently refit a new tube section to the bottom 10m element/section. This vertical has served me well and definitely works well with a few radials. I like it a lot and it sometimes has the edge over the dipole on the 40m band. As for 80m its a great receiver but is narrow banded on transmit meaning the use of ATU is necessary.

20m is up and down but has been providing some good DX openings here and there so I will be always listening around the band for activity. The same goes for 17m through to 10m, catch it when its there and always worth a quick check. With a bit of luck the FM repeaters from the USA will be coming through up on 29MHz if we get any propagation. Its another great thing that happens from time to time during the winter months.

That's about it for now, hope your all keeping well and staying safe as possible. I am working back at College fulltime and really enjoying the company of my learners. We are working as safely as possible and at the same time trying to get on with life which is a lot more interesting than when I had to stay home back in full lock down. Our region is classed as ''high risk'' and a few staff and students have been affected but thankfully all have made full recoveries with nothing two terrible whilst being ill. We have masks on and welding headshields with extraction and the cleanest hands you have ever seen on a welder so with a bit of thought, consideration and common sense we should hopefully continue on through the other side eventually.

Look forward to catching up with some of you on the bands and of course YouTube! Thanks for passing by my old time blogg. Have a great weekend!

PE4BAS, Bas said…
Hope to work you on 80m some time again Simon. Always notice you've been live on youtube but I really can't find out "when" it is or was. Well, I remember our QSO on 80m a few years ago, it was with excellent signals. Till we meet again....good DX, 73, Bas

Hope all is well, yes I will hopefully work you during CQWW. I am always looking forward to that contest h.i.

I think next time we meet on 80m both our signals will be good old friend 🙂.

Always a great pleasure to hear from you and even better to hear your Station.
Have a great weekend my friend.
Best 73 to the family de M0YKS Simon
9:21 pm