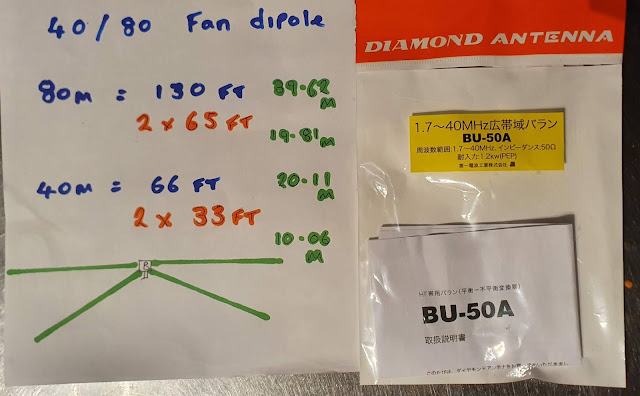 Hi All! Hope you are keeping safe... We are in the same position as most regarding lock down and other than going to work I have been stuck indoors a lot lately. So, off outside into the garden it was and antenna building time once again was here.

I decided to replace the prototype 40/80 fan dipole that has been in use since the end of spring. It has been working really well even though I made it from some random used wire, I bought three reels of SotaBeam military spec heavy duty wire which come in 50 meter reels. The wire is stainless coated multi strand 50 ohm and is in a low impact green colour. It is very good for antenna elements or radials and solders up nicely.

I also decided I wanted to try out this new build double dipole with a suitable 1:1 balun that would help prevent unwanted coaxial line transmission and also help reduce unwanted reception noise on the feed line from random electrical sources nearby. The balun also helps to isolate the returning RF at the feed point and balances the dipole elements to 50ohm, as well as helping to produce a more effective radiation pattern on the transmit signal generated.

I looked into making my own, but in my possession had a gift voucher to spend on Amazon. So I opted for a commercially built balun capable of handling my 400 watts. I ended up with the Diamond BU-50A which is a really neat piece of kit. 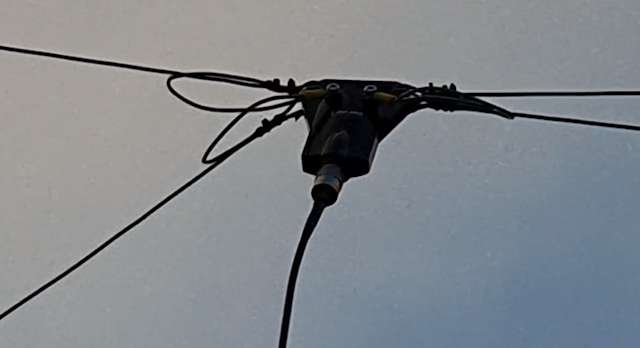 I made a step by step video on how to make your own 40/80 fan/balanced double Dipole, If you want to have a go watch the video below.

The result is great! I have 1:1 - 1:5 across the full 80m band without any need for an ATU and the same  1:1 - 1:5 also on 40m after a slight adjustment. I had made the antenna slightly longer and had to cut the legs equally to achieve the best match. The reception clarity has improved on both bands and the noise has lowered in strength. My out going signal as ever, is good to go and I will be DX hunting over the winter months! Thanks for passing by catch you soon. 73 Stay safe!

Over the past 12 months the display on my Yaesu FT-857 has developed the "zebra stripes" problem which after looking in to it, this has probably happened because of high temperature from the sunlight entering into my vehicle. The best way to resolve the fault is to install a new board into the front panel which I carried out last night with successful results. I began by contacting YAESU UK who came straight back with the cost and part numbers which was very reasonable as the total cost for a complete brand new panel and new AF/SQ VR control was under £140. The panel has a screen and selector control so I thought I would renew the AF/SQ control at the same time. The staff at YAESU UK are extremely knowledgeable and very helpful indeed, I gained a few tips from one of the gentleman at YAESU UK regarding the task I was about to undergo.  The AF/SQ VR required careful soldering as the terminals are very tiny but apart from that the job was not too difficult and I managed t
Read more